Butterflies and moths have been separated in most languages for a long time indeed. Scientifically however the two groups do not exist. Yet even scientists continue to use the distinction. So we will be happily using it on these pages as well. There are two main differences between butterflies and moths. Moths have a connection between the front wing and the hind wing, which butterflies lack. Butterflies therefor can manipulate the two wings separately. Furthermore all butterflies have rather long, threadlike antennae ending in a knob. Moths have all kinds of antennae, but never threads ending in a knob. Sometimes other differences are mentioned, but usually these do not exist. Most butterflies do fly during daytime, but some fly during the night as well. And some moths fly in broad daylight only, like the clearwings. On this page we'll deal with butterflies from these families:

Most of the more colourful and larger butterflies in Europe belong to this family. In many cases there is a big difference between the underside and the upperside of the wings. The underside is dark and often cryptically coloured, if coloured at all. This is to make the butterfly hard to spot when it is in hibernation. When landed on flowers the wings are continously opened and closed thus deterring hunters like birds and Dragonflies. Nowadays Satyrs are placed in this family as well, making it one of the biggest butterfly families. Presently almost 7,000 species are known. We deal with Satyrs in the subsection Browns. 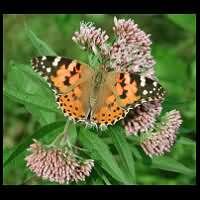 Migrates every year from Southern Europe to northern parts up to Iceland. More... 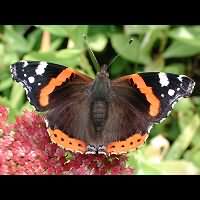 Another immigrant, but appearing in much greater numbers. More... 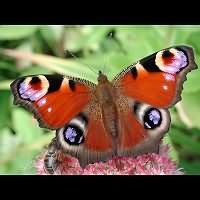 One of the most beautiful European butterflies. More... 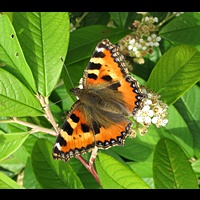 One of the most common butterflies in the garden. more... 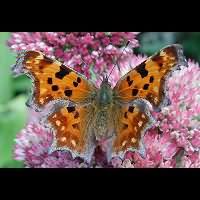 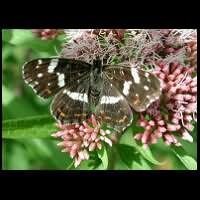 Has two distinct broods in our region: a light spring brood and a much darker summer brood. More...

Despite the high rank this is not a very impressive species at all. More...

The family of Browns is composed of Satyrs and Wood Nymphs. All are brownish butterflies showing eye-shaped spots, usually on both sides of both wings. These eyes either frighten the attacker or mislead them. Predators concentrate on the eyes near the edge of the wing and thus are distracted from the actual body. Besides the 'eyes' on the wings move rapidly, so the attacker gets confused and fails to apprehend the poor victim. Because all species are brown predominantly, they are also referred to as browns. The base of the veines in the wings is swollen in all browns. These parts of the vein are a very rudimentary hearing organ. Some other brush-footed butterflies also have these primitive 'ears', but not all. Nowadays many scientists believe the browns are just a subfamily of the brush-footed butterflies. This subfamily is called Satyrinae. Here we deal with them as being a separate family. In Britain some 11 species exist, in the Benelux countries some 13 species are to be found. Reaching a wingspan of some 35 to 45 mm most browns are quite small. In Southern Europe some bigger species exist, but they have never been found north of the Alps. As most browns are quite dull people tend to overlook them, even though some of the most common butterflies, such as the Wall and the Ringlet belong to this family. 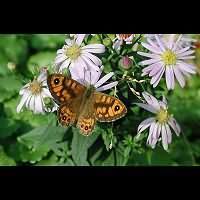 The upper side of the wings is marked not unlike those of Admirals. The other side reveals it is a Satyr after all. more... 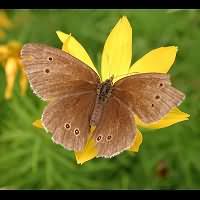 A very common, but rather dull butterfly. More... 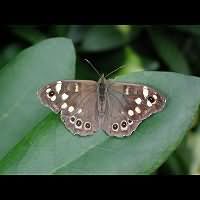 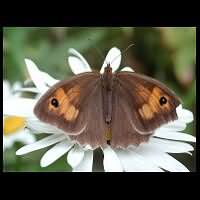 This family of butterflies is usually called The Whites. Not all members are white, for some are orange or yellow. The family is very common in the moderate temperature zones of the world. Unlike many other butterflies the whites tend to having only one or two colours and little markings on the wings, making them look much duller than many other butterflies. Most species have a wingspan of some 50 mm, meaning they are about the average size of the butterflies common in gardens in Western Europe. The caterpillars usually are greenish and are hairless or have short hairs only. The pupae are attached by self woven belts to plants, trees or even walls. Some species overwinter as caterpillars, most as pupae. In many species females and males are marked differently and can be told apart easily. The adults of the various generations also differ and can be told apart. The differences can be seen only studying resting or feeding animals. When flying about most whites look identical. The caterpillars of some species live on cabbage. Man took cabbage all over the world, often taking the whites with him. Some species are found world wide nowadays, especially the Large White and the Small White. In agriculture they often are considered a pest, the Large White being the most notorious of them all. 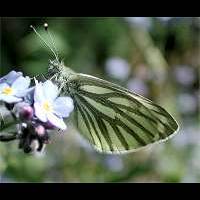 Also known as the Mustard White, this is the most common White in our garden. More... 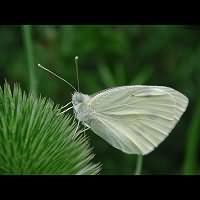 Often seen in gardens and parks and about the same size as the one above. More... 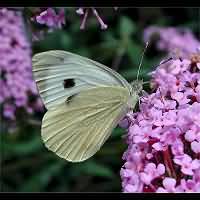 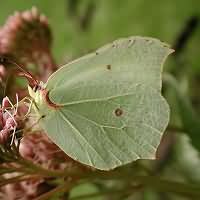 Sometimes seen on mild days in January or February and one of the first butterflies to appear in springtime. more... 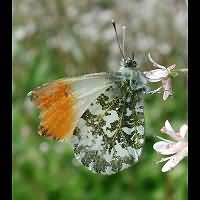 Colourful white also on the wing in spring. More...

The family of the Lycaenidae is generally referred to as Blues. True, a number of species are blue indeed, but they are only a portion of all species within this family. And of many only one side of the wings is blue: the upperside, which many species hardly ever show! Actually this family is comprised of many small sized butterflies that did not fit in any other family. For the coppers are part of this family too. Many coppers look like very small nymphalids, coloured like for instance the Small Tortoiseshell. Another group in this family are the hair streaks, many of which have a small tail like attachment to the wings, making them look like very small Swallowtails (Papilionidae), which are much bigger and whitish or yellowish.

Most common blue in our garden, usually seen daily in this species' flying season. More... 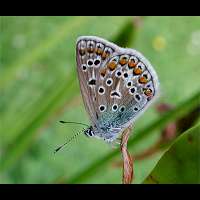 Another very common species, but less though in our garden. More... 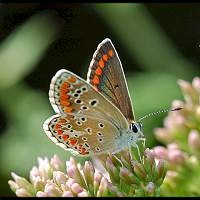 The Brown Argus is a blue brown, figures... More... 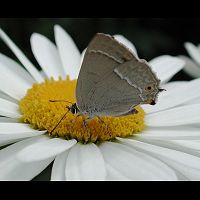 This very common species is not seen very often, as it prefers to fly near tree tops. More... 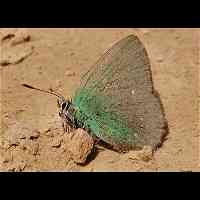 The Green Hairstreak is common in most parts of Britain, but numbers are declining. More... 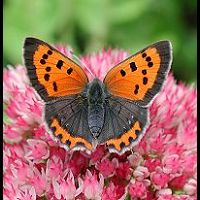 Skippers all do look like another and when you have seen one, you will always be able to tell whether a butterfly is a skipper or not, even after a very short glimpse. Skippers are heavily built, but have tiny wings. They seem to be a mix between moths and butterflies. They have the heavy body of the owlets or woolly bears, but the antennae have a knob on them, like in any other butterfly. They hold their wings together over the body, something never seen in Owlets and all species fly during day time. So far we had only two species in our garden: the Large Skipper and the Essex Skipper. 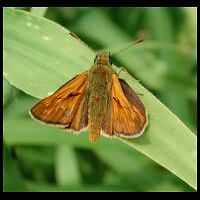 The Large Skipper is a regular visitor to our garden. More... 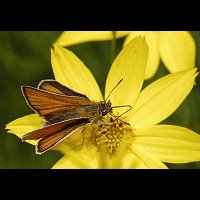 In the USA the Essex Skipper is known as the European Skipper. More...