The click beetles are a family of mostly medium sized beetles, comprised of little under 10,000 species. They are uniformly shaped and most are easily identified as click beetle. When beetles land flat on their back, it is very difficult for most of them to get back on their feet. May Bugs often die that way. Some beetles however do have a special hinch between belly and breast. It sends them quite high into the air, allowing them to turn around before getting back on earth. As they do this with a clicking sound, they are called Click Beetles. They also use this mechanism to scare off or confuse enemies. Even though some species are very colourful, most are black, brown, dark red or greyish. The larvae of the Click Beetles are called wireworms. They can be harmful to grassroots and newly planted seedlings in places that used to be grassy. As they often appear in great numbers gardeners hate them alltogether. Wireworms live 3 to 5 years and are quite resistent to pesticides. 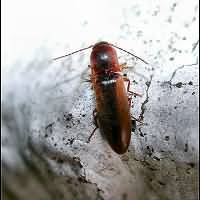 Dalopius marginatus is a small Click Beetle measuring 6 to 8 mm only. more... 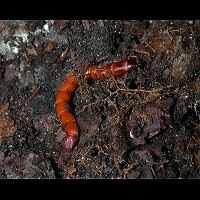 The larvae of Click Beetles, including the larvae of Dalopius marginatus, are called Wire Worms. more... 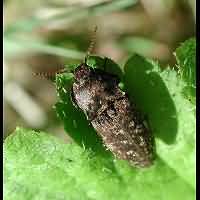 Agrypnus murinus is a very common species on the continent. more... 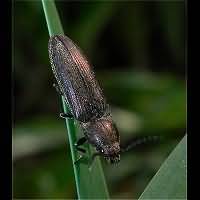 Cidnopus aeruginosus has light golden hairs all over the body. more... 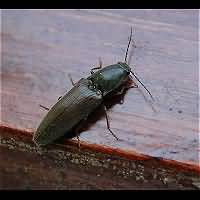 Athous haemorrhoidalis is active during the day, making it a click beetle seen regularly. more... 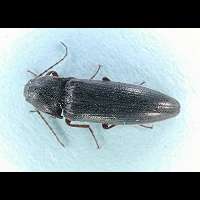 Melanotus rufipes is just one of the many black Click Beetles. more... 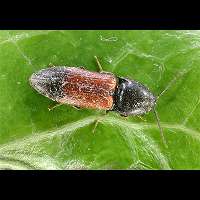 Ampedus balteatus has bi-coloured shields. One of the easiest Click Beetles to identify. more... 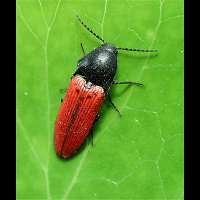