Another big group of European bees: the mining bees, genus Andrena. Most of them belong to the genus Andrena. In moderate zones this genus is represented by well over 100 species. The status of many species in Britain is unsure. The estimations run from 60 to 80 species, with quite a number of endangered species. Mining bees are very hairy bees, often reminding one of bumblebees and carderbees, but they are much slimmer and usually their hairs are a bit shorter. The genus contains variable species in size. Some reach an impressive 16 mm, many others don't even reach 4 or 5 mm. Often telling the various species apart is not an easy task. Especially the midget mining bees, belonging to the subgenus Micrandrena can only be identified by experts, who study their genitals. But larger species are difficult to tell apart as well. Males often differ considerably from females and frequently are each other's spitting image. Males also differ less in size from oneanother and are usually smaller than the females. Some species are quite variable and older specimens may have lost many of their hairs, causing the loss of their characteristic colouring as well. These may even look like bees from other groups! All females have a bundle of hairs on the first part of the leg to collect pollen. Mining bees do not live in colonies. They live a solitary life. But in many cases females tolerate other females digging a hole right next door, giving a colony like impression. In some species females even share the same entrance, even though, underground, each makes its own chambers. As you might conclude from the name Mining Bees build their nest by making mines in the ground, preferable sand. They especially enjoy firm sandy soils with no overgrow. That's why various species are noted by people. They build their nests in sandy paths. These paths have everything a mining bee requires: dry, well established sand and no plants threatening to either overgrow the nest or destroy it by means of their roots. One of the main enemies of mining bees is the cuckoo bees. A cuckoo bee is not bothering about building nests or feeding their young, it simply deposits its eggs in an existing nest. When the cuckoo's young hatches it will first eat the egg or larva present and then the food stored by the rightful owner! Mining bees have their own cuckoo bees belonging to the genus Nomada (wasp bees). In many cases each mining bee species has its own wasp bee species.

The Early Mining Bee is one of the most common mining bee and a frequent visitor of gardens and parks. More...

The Tawny Mining Bee is one of the best known Mining Bees. More... 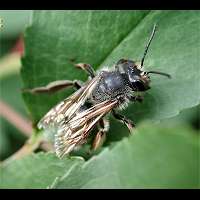 The Chocolate Mining Bee often nests in large groups. The females even share the same entrance. Underground however each female makes her very own chamber. More... 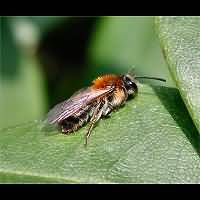 The Blackthorn Mining-bee is often seen in gardens, but hardly ever identified as such. This is because it is very similar to the Early Mining Bee. More... 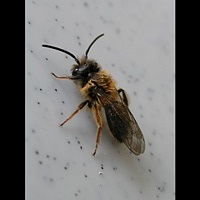 Gwynne's mining bee is a distinct mining bee, because of its contrasting colouring. More...

The Buffish Mining-bee is a dark, hairy and rather big species. More... 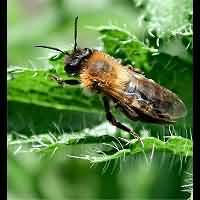 The Grey-gastered Mining-bee is very similar to the Honey Bee, but slightly smaller. More... 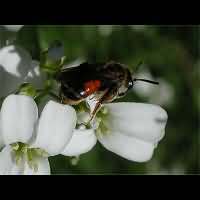 The Red-girdled Mining-bee is a rather rare Mining Bee. It is most likely not found in many gardens. More... 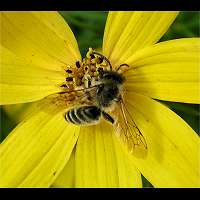 The Yellow-legged Mining-bee seemingly breeds in colonies. In Southern England a group of 40,000 females has been seen nesting close together. More... 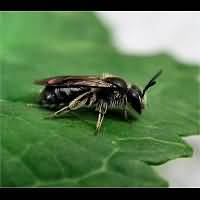 Micrandrena species are a groep of small, black and almost identical Mining Bees. To tell the exact species, they have to be examined under the microscope. More...