At this page we will deal with some bugs we haven't dealt with before. They belong to various families. Some of these are represented in our region by few species only, others are rarely seen in gardens. Assassin Bugs differ from shield bugs by a longer and more slender body, usually long, thin antennae. Assassin Bugs actually belong to two families: the Damsel Bugs (Nabidae) and the Kissing Bugs (Reduviidae). Another well known family is that of the Water Striders. Actually it is represented by various species in our parts, but these are extremely difficult to tell apart. Seed Bugs are also known as Ground Bugs. Usually they are dark. Most are small bugs, looking much like Plant Bugs. Often you can tell the difference by looking at the antennae: the Seed Bugs have antennae looking like those of the Shield Bugs. Those of the Plant Bugs are usually long, very thin and often one part is much longer than the others. Another difference between the two families is that Seed Bugs have ocelli (small simplified eyes on top of the head), Plant Bugs don't. The odd family of Lace Bugs is comprised of among others a number of species similar to leaded windows. The Scentless Plant Bugs have a transparent section (often referred to as 'windows) in their upper shields. 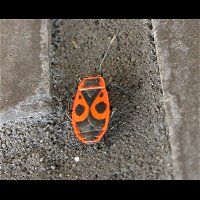 The Firebug is a lively red bug with black markings. Despite the scientific name it is not wingless, but the wings are rudimental, so the firebug can't fly. More... 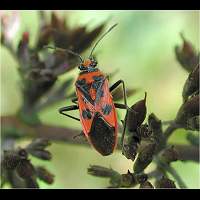 Corizus hyoscyami is often mistaken for the Firebug, however its head is red, the markings differ considerably and it is capable of flying. More... 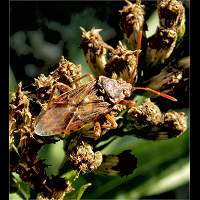 In our garden two Stictopleurus species turn up regularly. Stictopleurus abutilon is extremely similar to the other species, but lacks the glasses like markings of that species on the neck shield. More... 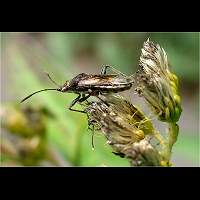 Stictopleurus punctatonervosus is very similar to the species above, but is supposed to wear spectacles. More... 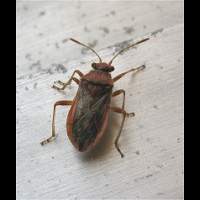 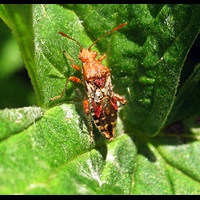 Rhopalus subrufus is a very small Scentless Plant Bug. Easily identified by the great contrast between the whitish and reddish brown parts. More... 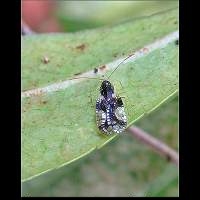 This beautiful but very small Andromeda Lace Bug was first seen in the UK in 1998. More... 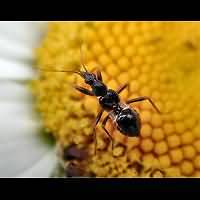 The larva of Himacerus mirmicoides perfectly mimicks an ant. More... 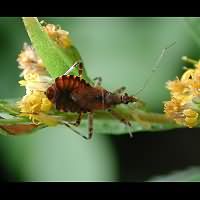 Adults of Himacerus mirmicoides are very similar to those of the next species, but have shorter antennae. More.... 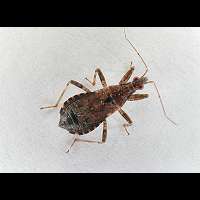 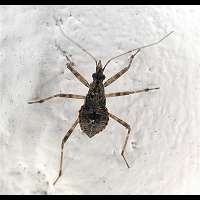 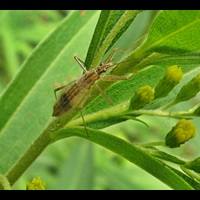 In many cases the Marsh Damsel Bug is best identified by the three length stripes running over the body. more... 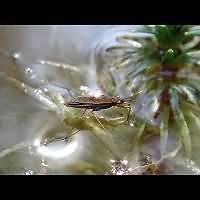 Whether this Water Strider (also known as Pond Skater) really is Gerris lacustris is uncertain, for there are several almost identical species around. more... 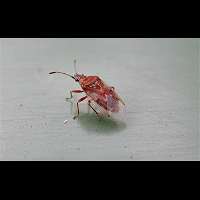 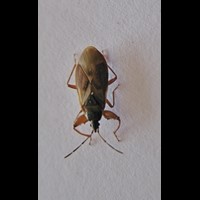 The Spruce Cone Bug likes to feed on the cones of Spruce.more... 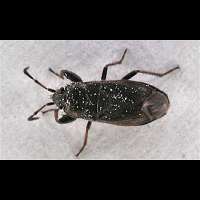 Megalonotus chiragra is a very dull, slightly hairy and unmarked Seed Bug. There are other very similar species. more... 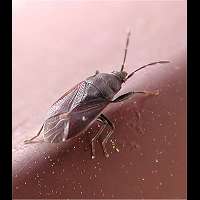 The genus Drymus is comprised of several, very similar brown species. Usually they can not be identified from just pictures. more...

Drymus brunneus is one of the few Drymus species which are identified easily. It is brownish and especially the legs are partially brown. more... 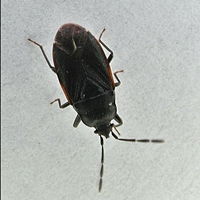 Drymus ryeii has very light lines at the edge of the front wings. If you are lucky, that is... more... 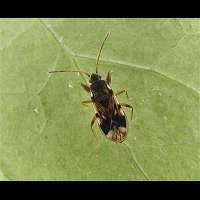 One in a series of similar species. The legs are rather light and the antennae are light as well. Usually an adult Scolopostethus pictus is fully winged. more... 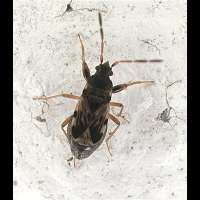 Scolopostethus affinis is very similar to the previous species, except for the antannae, which are vicolour. And what's more, the upper part of the leg is darker. Finally it usually has reduced wings. more... 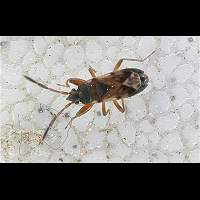 Scolopostethus puberulus can be told apart from his brothers by looking at the bicoloured antennae. The light first two segments of the antenna are in sharp contrast with the two dark upper segments. more... 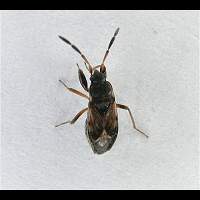 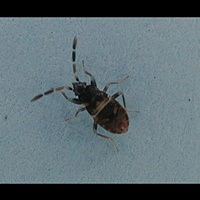 The larvae of the Scolopostethus species can not be identified, for they all look the same.more...