The family of woolly bears or Arctids is named after the larvae rather than the imagoes. The caterpillars are very hairy and often very dark, thus looking little a very tiny 'bear'. The adult moths often are very hairy as well, especially the bigger species. A number of these moths are very colourful with lots of red and yellow. The colours serve as a warning to predators: many species are awfully tasting, some even poisonous to birds. This family is divided into two rather different subfamilies. The Ermines and Tiger Moths (Arctiinae) are rather big and colourful, while the footmen (Lithosiinae) are usually quite small and greyish or buff.

The subfamily of True Woolly Bears is comprised of the Ermines and the Tiger Moths. Usually quite big, colourful and extremely hairy moths. In many cases not only the body is hairy, but the legs as well. The adult moths of many species either feed nor drink during their life span. Not all Ermines actually belong to this family. Many species belong to the family of Yponomeutidae and are much smaller, less hairy and more elongated. Actually the Arctiinae are macro moths, while the Yponomeutidae are micro moths. 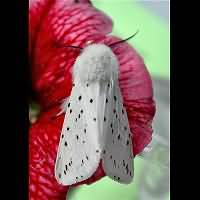 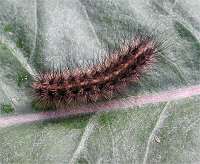 The caterpillar of the White Tiger is very hairy as well. More... 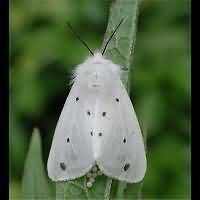 The female of the Muslin Moth is similar to the White Tiger above, but usually she has less spots and a number of them are much bigger. more... 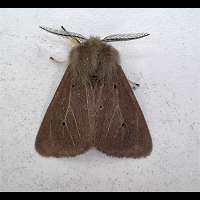 As the basic colour of the male Muslin Moth is brown and the spots are less obvious. more... 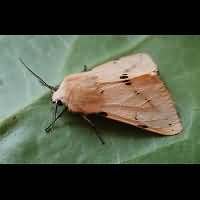 The Buff Ermine maybe yellowish white, brownish white or creamy, but it is never snowwhite. more... 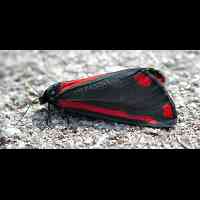 The Cinnabar Moth is on the wing during the day and at rest at night. more... 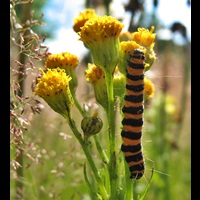 The caterpillar of the Cinnabar Moth sits on top of the host plant, undisturbed. more...

Footmen are rather easily identified by their shape: elongated. Often they put one wing on top of the other when resting and in some cases the wings are completely curled around the body. Especially buff variations and worn out animals bear a striking resemblance to the Grass Moths. You can tell them apart easily by two particulars: Grass Moths always have a snout, Footman never have a snout. When resting Grass Moths have their antennae backwards on top of their wings, Footmen at rest always hide their antennae under the wings, or hold them in front of the body. The caterpillars of Footmen always live on lichens or mosses growing on tree trunks or branches. Some species even appear in town as their caterpillars feed on lichens on roof tops. Some of the greyish and buff species are hard to tell apart at times. Other species are unmistakable. 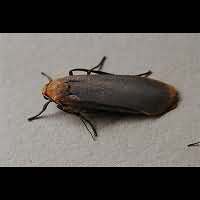 In grey animals the orange of the head continues on the body. In most other footman the body itself is grey. Buff variations may be more difficult to identify. more... 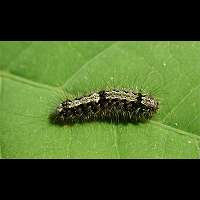 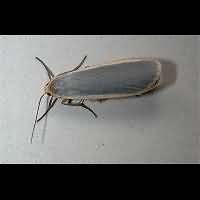 The orange line at the front edge of the frontwing tapers towards the tip of the wing. more... 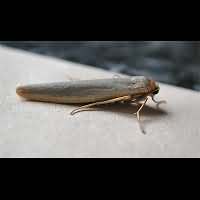 In this species the orange line doesn't taper towards the tip of the wing, but stays the same. more... 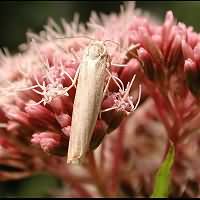 Buff Scarce Footmen are hard to identify, for they are very similar to the Buff Footman. Still try to find the line on the wing's edge. more... 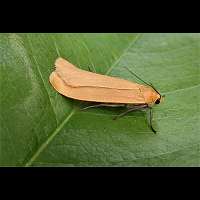 When fresh unmistakable. Worn out animals can be more buff, but this species is on the wing earlier than the others. more... 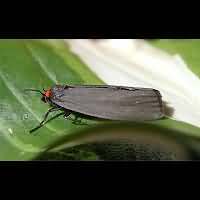 You can't make a mistake here. There is no moth like it. more... 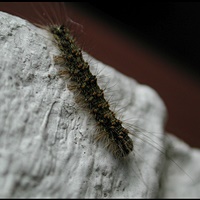 The caterpillar of the Red-necked Footman eats algae and lychen, even those growing on walls and roof tops. more...